Event “Proposal for Women Resistance to the pharmaceutical industry”.

On May 28th, the International Day for Action on Women’s Health, the Women Network for Health (Xarxa de dones per la Salut) invited me to participate in the event: “Proposal for Women Resistance to the pharmaceutical industry.” The Xarxa’s President, Margarita Lopez Carrillo introduced Teresa Vila-Forcades, doctor, theologian, Benedictine nun, feminist and author of “Crimes of the big pharmaceutical companies” and then different groups explained how their resistance was organised. 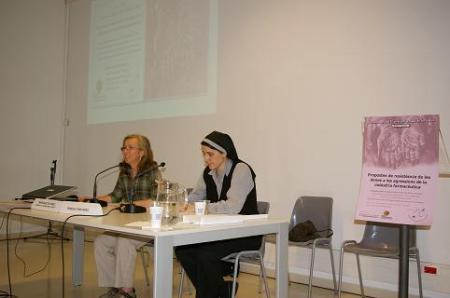 A historical review, to know the origin of this celebration.
In Costa Rica, just following the 5th International Women and Health Conference (1987), a proposal to celebrate an annual day of action for women’s health from the Health Network of Latin-American and Caribbean Women (Xarxa de Salut de les Dones Llatinoamericanes i del Carib). The first day was celebrated in 1988 with a Campaign for the prevention of maternal morbidity and mortality  coordinated by the Women’s Global Network for Reproductive Rights  (WGNRR) and the Health Network of Latin-American and Caribbean Women. Its objective was to report and ask for attention around the high rates of maternal morbidity and mortality especially in less developed countries and to ask governments to develop policies and appropriate legislation to address it. Since then, regular action is taken in many countries to support women’s health. 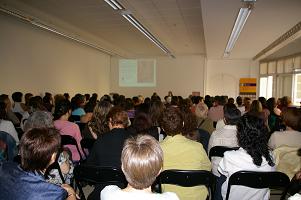 The Barcelona’s Centre de Cultura de Dones Francesca Bonnemaison hall was full of women and some men. Around 100 people listened to Teresa Forcades detailed data and analysis on how women (men too) can decide over their own health beyond what others have already decided for them and how they can also shape the health system to take into account gender in the way it works.

Better than what I can tell here, you can read Teresa Forcades’s book “The Big Pharma crimes”; (Catalan and Spanish versions available: “los crímenes de las grandes compañías farmacéuticas”,) or access the TV3 program” “singulars” (in Catalan) where she was interviewed.

Following her presentation several of the network groups discussed their experiences and what the role of the network could be. Among those present: Sílvia Espinosa from the CC.OO trade union (Comissions Obrerers); Graciela Traba from the Psychologists Association  (COPC ); Carme Valls from  CAPS; Montse Pineda from  Creación Positiva; Evarista Garcia –Peña from “Labour is ours” (El Parto es Nuestro); Eulàlia Torres-Alba from Breastfeeding; Mama Samateh from AMAM,( Women Association against mutilation) and a representative  from (Women Pacific Route from Colombia) Ruta Pacífica de Mujeres de Colombia.